“Companies with an inclusive environment will always flourish”

Sylvia Oba is Teva’s Compliance Manager for the UK, Ireland & Malta, and has recently joined Teva UK’s Equality, Diversity & Inclusion steering group. She spoke to us about celebrating Black History Month, challenges she has faced in her career and the importance of diversity and inclusion in the workplace. 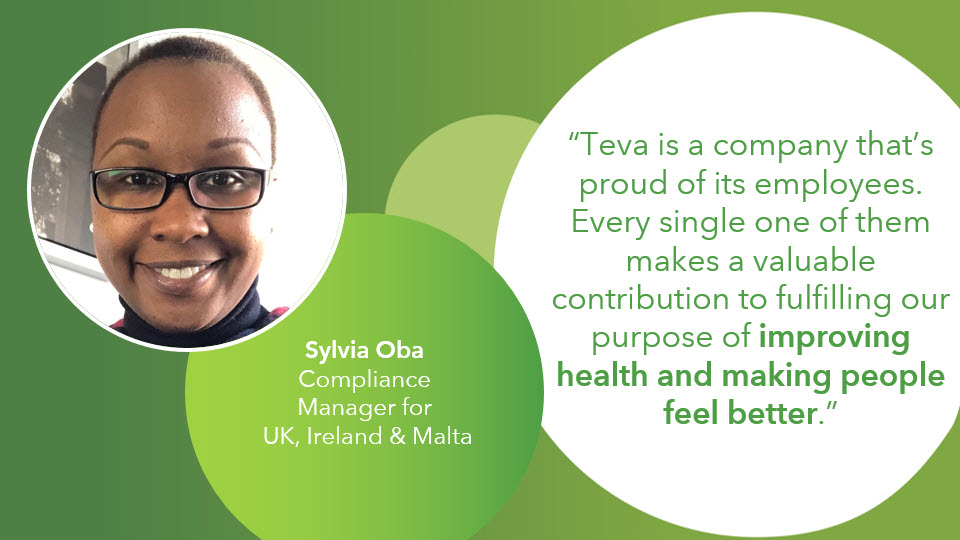 Celebrating Black History Month enables people to think about where we are in terms of diversity and inclusion and showcases the things that prominent black people have achieved. There’s still a lot of work that needs to be done in terms of diversity and inclusion. Black History Month is one way to show where we’ve come from and what we’ve achieved – and what we need to do to get equality. Black History Month is important because people might not have encountered this information before. It provides us with time to focus and put things into perspective. We still need to do more to create equality in the workplace – as well as out of the workplace.

I’m proud of the fact that Teva is committed to engaging with equality, diversity and inclusion. Companies with an inclusive environment will always flourish because of the benefits that come with a mix of different backgrounds in the workplace. And for us that means we can continue to make better days for patients across the UK.

Teva is a company that’s proud of its employees. Every single one of them makes a valuable contribution to fulfilling our purpose of improving health and making people feel better. I’m a great believer in equality, diversity and respecting other people’s backgrounds. I’m from Kenya and went to an international primary school in Ethiopia due to my father’s work at the diplomatic mission. This provided me with exposure to people from a lot of different backgrounds from an early age. I see people as equals and for who they are, not because of their race or background.

I’ve found myself to be the only black person in some work environments. I don’t let this hold me back - probably due to my background, values and beliefs. The challenges I’ve faced in my career have mostly been at the recruitment stage. My previous surname was more Italian sounding - people have actually said to me in interviews: ‘I didn’t expect you to be black’. It’s much easier in cities because people are used to working with people from different backgrounds. But these are still issues, even if people don’t want to talk about them.

I’ve spent much of my career in legal related roles. Half my role at Teva is local compliance officer for the UK, Ireland and Malta, and the other half is due diligence for the global team. I also have a masters in human rights law. I initially wanted a career in academia and started a doctorate in law but I decided that it wasn’t for me. That’s when I switched careers. Before joining Teva in February 2017, I worked for charitable organisations, O2 and then joined the financial industry as a Personal Assistant to the CFO before working in compliance at the same firm.

There are plenty of things that companies can do to ensure diversity is embedded in everything they do. Having these conversations is a good start, followed by taking a look at how diverse their work environments really are. It’s up to companies to then create an inclusive workplace where people feel comfortable in their skin; putting diversity and inclusion at the centre of leadership and development.

When people talk about diversity, the first thing that usually comes into their minds is BAME (Black, Asian and minority ethnic). But it’s so much more than that, including other ethnic minorities, LGBT people, and people with disabilities. It’s about everyone listening to each other and talking; only when people feel comfortable can we progress and contribute effectively.

At Teva, we believe we have more to offer our employees than just their payslip; working at Teva is about more than that. It’s about job satisfaction, developing your potential to achieve your career goals and, most importantly, improving the lives of patients. My advice to anyone with a BAME background would be that you just need to believe in yourself; go out there and engage.

In my experience, black people often go above and beyond in the workplace because they feel they need to prove themselves. I do this myself sometimes. All colleagues need to be accepted, including by their manager, otherwise they are always seen as being ‘other’. Diversity in the workplace isn’t about just ticking a box or symbolic representation, it’s about equal participation and enabling people to flourish. We need to see a wider mix of people in the workplace and equality and respect for everyone regardless of their background.

Outside of work, I still take part in human rights events. This has included giving talks about human rights and Africa at my local university. I love meeting people from different backgrounds because it’s always a chance of learning something new.

The person who has inspired me the most in my career is Eleanor Roosevelt. The wife of former US president Franklin D. Roosevelt, she had her share of controversy but she was a champion of civil rights as early as 1945. Eleanor Roosevelt championed the rights of everyone, regardless of background. She stood up for people and was way ahead of her time. She was the first chair of the UN Commission on Human Rights. She was also one of the authors of The Universal Declaration of Human Rights, which is about respecting people and equality. If we aspired as human beings to just follow that document, I think the world would be a better place.