We have successfully completed a number of partnership working projects with various NHS organisations across the country, with some project on-going. Find out more about these projects by reading the executive summaries.

Each University Health Board in Wales has a statutory duty to develop a three year strategic plan.

Betsi Cadwaladr University Health Board is the largest health organisation in Wales, providing healthcare services to a population of around 676,000 people across the six counties of North Wales, as well as some parts of mid Wales, Cheshire and Shropshire. It employs around 16,100 staff and has a budget of around £1.2 billion.1

The financial and operational challenges of 2013/14, together with the introduction of more robust planning required new ways of working and new ways of thinking.

In order to ensure that the University Health Board’s strategic plan was robustly developed and successfully delivered, there was an additional need for the development of operational plans at a Clinical Programme Group (CPG) level.

To support the University Health Board’s three year strategic plan, the Pharmacy & Medicines Management CPG along with other CPGs within the organisation were charged for the first time with the development of their own strategies and plans.

The aim of this externally facilitated project was to support the CPG in the process of developing their one year operational plan and to begin to consider what was required to develop three year rolling strategic plans.

The objectives of the project were aligned to:

The CPG team were set a task of developing their plans based on; MUST DO IMPERATIVES ONLY
This challenged historical ways of working at both an individual and team level

The facilitators supported the team in:

The facilitators encouraged the CPG team to:

The project delivered more outcomes than were initially planned

For the Betsi Cadwaladr University Health Board:

For the Pharmacy and Medicines Management Clinical Programme Group

For the wider NHS, this approach

This is a case study of how NHS East Riding of Yorkshire worked in a local partnership with the Teva Integrated Healthcare Manager and Teva UK Limited to address the issue of medicine wastage.

NHS East Riding of Yorkshire identified significant areas of medicines wastage in the local area, which if it was addressed successfully could save the NHS around £500,000 per annum.

The local PCT identified that the main population groups responsible for the over ordering of medicines are younger mothers and those over 60 years of age. 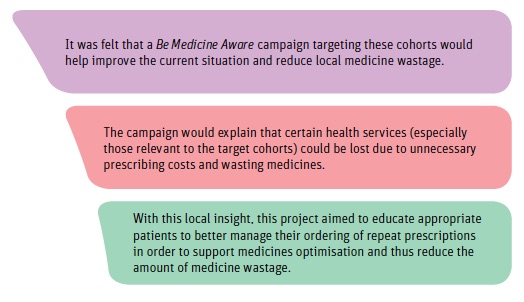 The objectives of this Be Medicine Aware campaign was to:

In order to achieve these outcomes, NHS East Riding of Yorkshire worked in partnership with Teva UK Limited as they provided:

Both the NHS and Teva UK Limited abided by the relevant regulatory bodies and guidance, including the ABPI Code of Conduct. 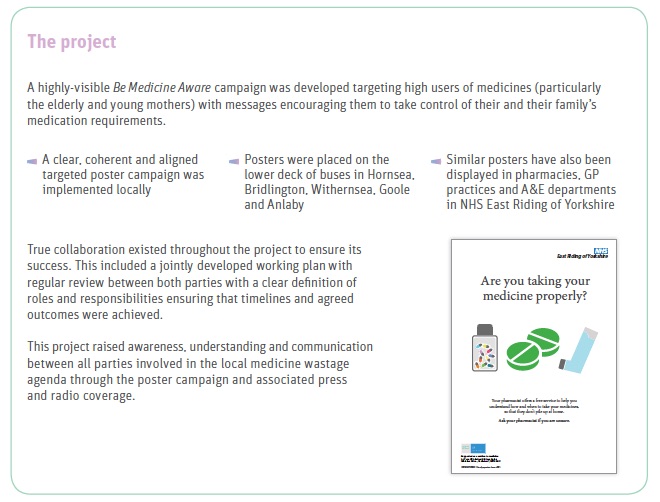 Benefits of the partnership